pomerol82 & friends 品味人生: 瑞典威士忌- Mackmyra 希望7號 (No.7- Hope): Everyone knows about whisky producers from Scotland, Japan, Canada, UK, etc. But did anyone know or hear about the producers in Sweden or Fi...
Posted by Unknown at Friday, July 19, 2013 No comments:

Springbank is one of the three distilleries in Campbeltown which are still in operations. Campbeltown used to claim as "The Capital of the Whisky World". Unfortunately, the whisky industry of this Capital was collapsing in 1930s and never resumes its golden age. In the following few decades there are only two distilleries survived , the Springbank and Glen Scotia, but until recently a reinstated distillery Glengyle joins the gang.

Though the situation of the whisky industry looks withered in Campbeltown, it does not mean the reputation of survivors being faded. In fact, for example of Springbank, its malt whisky is quite demanding and very expensive, especially those aged and old bottlings.

Despite of the high price and demanding of Springbank whisky that the prospect looks good, the reality that it was planned to shutdown in 2008 due to the bad economy. It however resumed limited production in 2009 and now its operation is fully resumed.

As aforesaid Springbank's whisky is very expensive, the reason behind is a sad story. Springbank is highly praised by many connoisseurs and obviously its whisky shall be demanding but the fact that Springbank experienced several shutdowns and reductions of operation over the years that results in the supply, especially those aged casks, always at low stock level, where hardly meets the demand from the market which eventually it results in the high price of Springbank whisky.

I am unable to afford  for old Springbank but to basic bottling. It is rather a good choice for meeting one of very few last standing distilleries in Campbeltown.

Nose: Nectar, peer, nuts, baked grain, lightly sea breeze
Palate: Honey, apple, nuts, dark chocolate, clove, sea salt
Aftertaste: Medium length, maltose, nut shell, sea water
Overall: Light on nose, peer aroma released with water. Full body, oily, much fruity with water. Good aftertaste, sweet and nice. It is a bit simple and lesser complexity but good balanced of favours, a comfortable dram. Though it is just a 10 years old basic bottling, it is bottled at ABV 46% rather than common 40 and 43% by most distilleries. Springbank remains the floor malting process which is considering of high cost but low efficiency and almost faded out from the industry. I quoted these two pieces of information just to admire the sincerity of Springbank in whisky making. Working hard in good faith does not guarantee the success but it must be an essential element in those success stories. 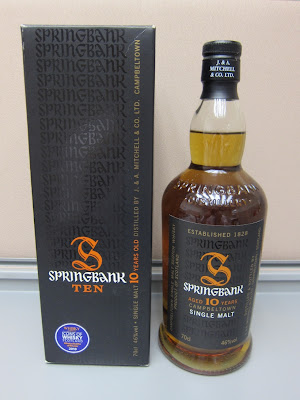 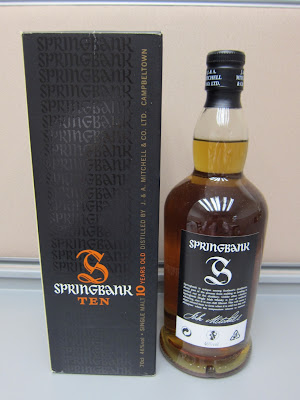 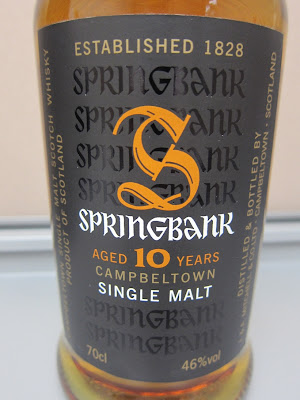 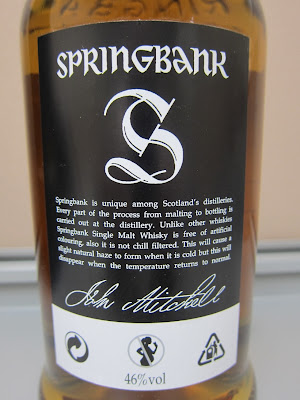 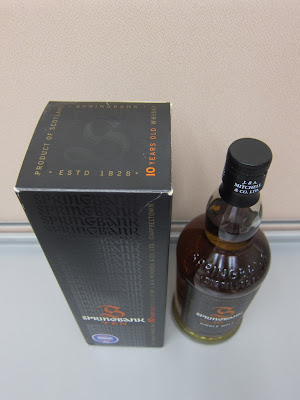 Posted by Unknown at Tuesday, December 11, 2012 No comments: